In the past several weeks, three members of the Oldfields community have won prestigious awards, and all have been given the opportunity to share their work with the public in a BIG way. Congratulations to Don Reigner, art instructor, Whitney Schultz, English department chair, and Emily ’15, art student extraordinaire!

Oldfields senior Emily ’15 was recently selected to participate in a juried art exhibition entitled Rising Art Stars, at the Montpelier Arts Center in Laurel, Maryland. Out of more than 600 entries, Emily won first place in the show! After being accepted by numerous art programs, plans to attend California Institute for the Arts , and we know she’ll go far in the art world! If you are in the Washington D.C. area, swing by to see the show. Click here for information on the Montpelier Arts Center.

Long-time Oldfields art instructor Don Reigner was also chosen to participate in a juried art show sponsored by the Laurel Art Guild. Out of over 60 works, Don’s piece won first place! Although Don currently teaches ceramics at OS, his work, The Sleeper Awakes, demonstrates the depth of his talent. The Sleeper Awakes is on display until March 29 at the same location as Emily’s work, the Montpelier Arts Center. 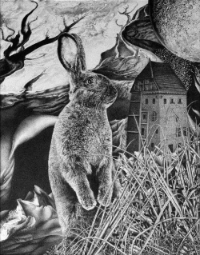 Switching from the visual arts to the written word, our English Department Chair Whitney Schultz entered a poetry writing contest sponsored through collaboration between Baltimore LED Art Billboard and Light Ekphrastic*. Her poems, “Prayer for Moath” and “Public Displays of Affection” (see below) were selected to be featured on the digital billboard by Penn Station during the week of March 23, 2015, so if you are driving down I-83 inside the beltway, look up! Learn more at Thelightekphrastic.com

*Ekphrasis is the graphic, and often dramatic, description of a visual work of art. The word comes from the Greek ek and phrasis, "out" and "speak."

Think not of the cage, but the flame.
Smoke expands, embraces you. Breathe.
You bow into the fire, greet the ash.

They will say you did not weep, did not
fling a sound out into the sky.
Did you think not of the cage, but the flame?

What prayer crossed your mind?
What face flickered in that flame,
called you to bow into fire, greeting ash?

A bright backdrop, obscene sunshine:
the colors felt wrong for the scene.
Think of the cage, not of the flame.

Some will say you smiled. Yielded.
Rising like smoke, let us exalt you.
You bow into the fire, we greet ash.

Unblemished, you ignite, smolder, extinguish.
If you don’t shine, you are darkness.
Think of the cage, think of the flame.
Bow at the fire, see him in the ash.

Give me the brio, the unabashed
kiss in public. The blouse, unbuttoned,
unashamed. Give me the highway
overpass—all concrete and grime,
a shaky hand, the crooked letters
of I

U NADINE: proud,
hopeful, the trust that she might
drive by, her eyes flickering overhead,
a quiet oh—those lips shaped
like the kiss she gave him
on her way out the door. Give me that
same trust, the confidence in knowing
that scrawled name in the sky
is just for me—the faith that
I could push you to a love
that turns you into a fool, the kind
that makes that train station kiss
last too long, embarrassing the onlookers.

The creative arts are alive and well at Oldfields!